In his follow-up to the acclaimed debut feature film, The Giant, Johannes 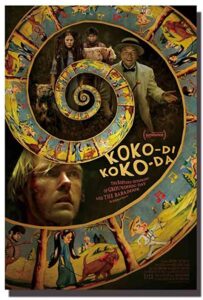 Nyholm’s Koko-Di Koko-Da recounts the story of Elin and Tobias, a happily married couple who regularly vacation with their young daughter. The family is on a dreamy holiday when an innocuous case of food poisoning derails their plans and forever alters the course of their lives.Three years later, the once loving couple is on the road again to go camping, looking for one last chance to go back to the way things used to be. But what once was is lost, and our characters instead find themselves having to relive the same nightmarish events, as that day and the horrors it

brings repeat themselves infinitely. Together, they must overcome their trauma, reconcile with their past and fight for their lives. Over, and over, and over again. Discerned through a dreamlike fabric, a story emerges about relationships in general, grief and reconciliation in particular, and love as a healing force. Director Johannes Nyholm stops by to talk about the mind-bending, Federico Fellini meets Rod Sterling mise-en-scène inhabiting this profoundly passive-aggressive tale of trauma, loss and truly terrible camping strategies.

To watch the film on-line go to: laemmle.com/film/koko-di-koko-da

Director’s Statement – The setting is those wee hours of the morning when dreams are at their most relentlessly untamed. This is also when the seed for many of my films comes to me. I’m sweating, struggling to go back to sleep and plagued by scattered thoughts. Suddenly they come together, leading me into a fairy tale. I write it down and then I can sleep. “Koko-di Koko-da” was both written and takes place during such a time – this nightmarish landscape between wakefulness and sleep. The film is deeply personal and a means to confront my own worst fears, much like the way the characters in the film are forced to confront theirs. It’s a universal narrative about a relationship that is falling apart. The main reason for making this film is that I’m fascinated by the everyday situations and power struggles lurking beneath the surface in relationships; what is not said, what is embedded between the lines. The love and happiness they once shared has evaporated, and so has the care they used to show for each other. Over and over again, we see them pushed yet again onto the same stage, the open glen in the woods, and into the airless tent. We observe them from above, like gladiators clashing repeatedly, without any opportunity to escape – be it from their tormenters or from each other. They are forced to confront each other, to display emotions, to be pushed around, humiliated, spat upon, tormented; in short – to be together. Any attempts to get away inevitably lead back to the same claustrophobic scenario. Made up of dreams, this story is also structurally constructed like a dream – or more specifically, a nightmare. Taking us through a labyrinth in time, like a dark grinding thought, never letting go, stuck on repeat. Presenting minor variations, but always with the same horrific outcome. – Johannes Nyholm

“Though at times tasteless and barely coherent, the story is oddly affecting, the very strangeness of Nyholm’s folkloric vision and its unnerving execution pulling you in.” – Jeannette Catsoulis, New York Times

“It works as a parable for what happens to grief when it is left un-exorcised and unexpressed.” – Peter Bradshaw, Guardian

“Writer-director Johannes Nyholm (The Giant, 2016) takes all the grief, loss and bitter recriminations of this Swedish couple and drops them into the realm of myth, dream and folklore.” – Anton Bitel, Sight and Sound