Behind a white picket fence, on an unremarkable suburban street, we discover 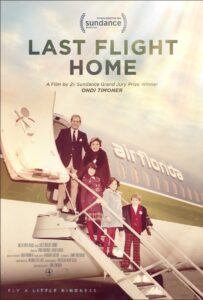 92-year-old Eli Timoner, who founded Air Florida, the fastest growing airline in the world in the 1970s. During his final days, we discover his extraordinary life filled with incredible success and devastating setbacks and, most importantly, the innate goodness that won him the enduring love and support of his family. Through stunning footage recorded by his middle child, LAST FLIGHT HOME takes audiences on an unforgettable ride through Timoner’s life, illustrating a modern-day success story built on the power of human connection. Two-time winner of the

Sundance Film Festival’s Documentary Grand Jury Prize (DIG!, WE LIVE IN PUBLIC), Ondi Timoner has created her most personal film yet, which intimately portrays her family’s challenging journey to find closure and invites us into a rare and honest

confrontation and conversation with mortality. LAST FLIGHT HOME is not only a unique and open display of the process of death, without inhibition or sanitization, but also a humanization of the journey of a family ‘midwifing’ a patriarch through his final days. Director Ondi Timoner joins us for a conversation on her elegant verité tribute to family, how and why she decided to share the Eli Timoner’s inspiring coda with outside world.

For updates and screenings go to: interloperfilms.com/lastflighthome

About the filmmaker – Ondi Timoner is an internationally acclaimed filmmaker whose work focuses on “impossible visionaries” (and LAST FLIGHT HOME is no different). She has the rare distinction of winning the U.S. Grand Jury Prize at Sundance twice — for DIG! (2004), about the collision of art and commerce through the eyes of two rival rock bands, and WE LIVE IN PUBLIC (2009), about the loss of privacy online through a NY social experiment created by Internet pioneer Josh Harris over the turn of the millennium. Both films were acquired by New York’s MoMA for its permanent collection. Since then, Ondi has created award-winning films/series such as JOIN US, about mind control; COOL IT, about climate change; BRAND: A SECOND COMING, about the transformation of comedian/author/activist Russell Brand; the 10-hour series JUNGLETOWN, about an intentional community in remote Panama; COMING CLEAN, about the opioid crisis; and MAPPLETHORPE, a scripted film she also wrote and produced about Robert Mapplethorpe starring Matt Smith (she recommends the Director’s Cut on Hulu).  Ondi is an active member of the Academy of Motion Pictures Arts & Sciences, the DGA, the PGA, the WGA, the IDA, Film Independent, Women in Film, and Film Fatales.  For more: interloperfilms.com

“Profound in its simplicity, wrenching in its honesty, and beautiful in its humanity.” – Elizabeth Weitzman, TheWrap

“It is a tribute, a grappling with mortality, an exercise in self-surveillance, a messy home movie, a brief account of aviation history and a lesson in letting go and grief.” – Lisa Kennedy,

“A loving tribute and immersive documentation of these last days, from the Timoner family to yours.” – Nick Allen, RogerEbert.com