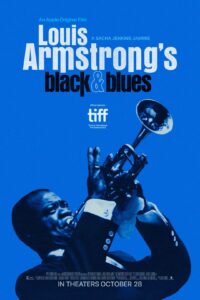 the world-changing musician, presented through a lens of archival footage and never-before-heard home recordings and personal conversations. This definitive documentary, directed by Sacha Jenkins, honors Armstrong’s legacy as a founding father of jazz, one of the first internationally known and beloved stars, and a cultural ambassador of

the United States. LOUIS ARMSTRONG’S BLACK & BLUES shows how Armstrong’s own life spans the shift from the Civil War to the Civil Rights movement, and how he became a lightning rod figure in that turbulent era. LOUIS ARMSTRONG’S BLACK & BLUES is a project of Imagine Documentaries and Polygram Entertainment with a production team that includes Sara Bernstein, Justin Wilkes, Michele Anthony,

Brian Grazer, and Ron Howard. Director and producer Sacha Jenkins joins us for a conversation on the profound impact that Louis Armstrong has had on American music, specifically jazz, his multi-

hyphenated career as a singer, trumpeter, actor,  bandleader, artist, ambassador of American culture, his life-long partnership with his wife, Lil, and how important it was for Jenkins to re-set the perception of this humble man with a thorough recounting of his personal, professional and musical life.

To watch go to: apple.com/louis-armstrongs-black-blues

“Like one of Armstrong’s great solos, it feels packed with dynamics, sprinkled with astonishing high notes, and immensely pleasurable.” – Leslie Felperin, Guardian

“With all that’s been said, reported and written about Louis Armstrong over the decades, it’s shocking how eye and ear-opening Sacha Jenkins’ new documentary about him is.” – Roger Moore, Movie Nation

“Sacha Jenkins eloquently shares the story of a legend that we barely knew as a musician or a man. Louis Armstrong blazed a trail in jazz, but had a side that will surprise, elate and leave audiences with a different kind of respect for his legacy” – Carla Renata, The Curvy Film Critic

“Jenkins is undaunted by the complexity of his subject, plunging ahead with swagger and not worrying if we have unanswered questions at the end.” – John DeFore, Hollywood Reporter

“With this tuneful, tender documentary, director Sacha Jenkins convincingly makes the case that there was no more significant music figure in the entire 20th century than Louis Armstrong.” – Bill Newcott, Movies For The Rest Of Us