M.C. Escher: Journey To Infinity is the story of world famous Dutch 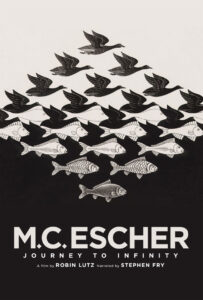 graphic artist M.C Escher (1898-1972). Equal parts history, psychology, and psychedelia, Robin Lutz’s entertaining, eye-opening portrait gives us the  man through his own words and images: diary musings, excerpts from lectures, correspondence and more are voiced by British actor Stephen Fry, while Escher’s woodcuts, lithographs, and other print works appear in both original and playfully altered form. Two of his sons, George (92) and Jan (80), reminisce about their parents while musician

legacy: one can see tributes to his work in movies, in fiction, on posters, on tattoos, and elsewhere throughout our culture; indeed, few fine artists of the 20th century can lay claim to such popular appeal. Director Robin Lutz and Producer

Marijnke de Jong stop by for a conversation on how far ahead of his contemporaries Escher was in capturing using abstract design elements to capture a provocative view of the natural world and how little he cared about being considered as an acceptable artist by the public or the art establishment.

For news and updates got to: zeitgeistfilms.com/film/mcescherjourneytoinfinity

Director’s Statement: “I fear that there is only one person in the world who could make a really good movie about my prints: myself ‘. This line wrote Escher in 1969 to an American collector of his work. And that is exactly what Escher is doing in this movie: he is the director, not literally but symbolically. Besides a visionary graphic artist Maurits Escher was a sharp observer who described his observations in numerous diaries, letters, lectures and catalogues. Thus, an image will be created of his personal life described in his own words, with all his fears, doubts, euphoric moments, political considerations, his amazements, his artistic development and of course his own opinion on his work. The public sees the film through the eyes of Escher himself: the camera is Escher. M.C. Escher will tell in his own words what he saw, what he felt, what inspired him, what amazed him, what irritated him. We will get under his skin and come as close as possible to meet and understand this great graphic artist. The camera is Escher’s eye! How did he get his inspiration, how he lived, who was that genius graphic artist which worked fanatic and finally stunned the world. Escher was astonished by his huge success, especially among the youth. This documentary is the first complete film about Escher’s live and work told in his own words!

About the filmmaker – Director Robin Lutz founded his own company in cultural audio-visual productions in 1988. He specialized in the production of cultural documentaries, in cooperation with or on behalf of broadcasters, funds, museums etc. Robin Lutz Audiovisual Productions has developed into a renowned production company and due to their great quality, a substantial amount of his films have been awarded, both nationally and internationally.

About the filmmaker – Co-Producer Marijnke de Jong  – After having finished her study in art history at Leiden University, Marijnke de Jong worked for 13 years as a curator in the print room of the Rijksmuseum in Amsterdam. Afterwards she worked for Europa Nostra, a heritage NGO, and was involved in the development and organization of the first two editions of a Heritage Film Festival, where she met Robin Lutz. From 2001-2014 she was director/curator of Panorama Mesdag in The Hague and specialized in art and illusion. Nowadays she is advising cultural organizations and since 2016 she also co-produces films with Lutz.