By virtually every yardstick, antisemitism in the US and Europe is rising and worsening in ways not seen since the 1930s. It comes in the forms 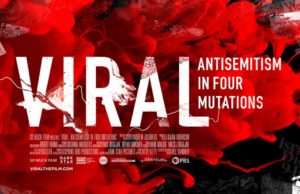 of vandalism, social media abuse, assault and murder. Like a virus, it mutates and evolves across cultures, borders and ideologies, making it all but impossible to stop. Filmmaker Andrew Goldberg explores its infectious behavior in his film VIRAL: ANTISEMITISM IN FOUR MUTATIONS as he travels through four countries to speak firsthand with victims, witnesses, antisemites, and interviewees including Bill Clinton, Tony Blair, Fareed Zakaria, George Will and Deborah Lipstadt. VIRAL: ANTISEMITISM IN FOUR MUTATIONS examines how some on the American far right have incited such acts as the mass shooting at the Tree of Life Synagogue in Pittsburgh, PA. In Hungary, we see how the Prime Minister has launched a massive campaign against Jewish

Holocaust survivor and billionaire George Soros that’s reminiscent of Nazi propaganda. Moving to the far left in England, we see members of the traditionally anti-racist Labour party conflating Israel and Jews, causing tremendous pain for the Jewish community. And in France, the film illuminates the seemingly endless wave of violence against Jews by Islamists and radicals. The increasing bigotry, and at times violence, within each of these four countries paints a terrifying portrait of how global hatred disseminates and harms. As activist Maajid Nawaz says in the film, “If we don’t draw a red line in the sand when it comes to antisemitism, Muslims will be next, gays will be next and everyone else who is deemed a minority will be next.” Director Andrew Goldberg joins us to talk about this particularly virulent strain of racism going back hundreds of years, continues to threaten the lives of Jews in Europe and the United States.

For news, screenings and updates go to: viralthefilm.com

“As a topic of tremendous ongoing importance with roots that desperately need exploration, anti-Semitism deserves, and needs, a look into its global impact and perpetuation that makes a deeper dive than this documentary provides.” – Todd Gilchrist, TheWrap

“Brutal, yet vital, the movie is must-see viewing in our current age of rising global hatred against not only Jews, but ethnic minorities everywhere.” – Christopher Llewellyn Reed, Hammer to Nail

“Viral: Antisemitism in Four Mutation is timely and it is vital, and it is a documentary that not only a community needs, but all of us do.” – Stephanie Archer, Film Inquiry