Just out of high school, at the age of 18, Miles Lagoze enlisted in the Marine 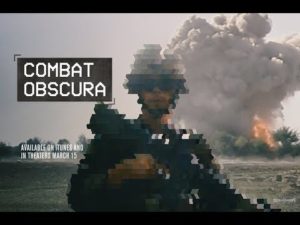 Corps. Lagoze was deployed to Afghanistan where he served as Combat Camera — his unit’s official videographer, tasked with shooting and editing footage for the Corps’ recruiting purposes and historical initiatives. But upon discharging, Lagoze took all the footage he and his fellow cameramen shot, and he assembled quite simply the very

documentary the Corps does not want you to see. COMBAT OBSCURA is a groundbreaking look at daily life in a war zone as told by the Marines themselves. More than a mere compilation of violence, the edit ingeniously repurposes the original footage to reveal the intensity and paradoxes of an ambiguous war from an unvarnished perspective. Director Miles Lagoze joins us to talk about his deployment in America’s longest war, adapting to a whipsaw life of boredom, camaraderie and death and training to become a filmmaker via the United States Marine Corp.

For news and updates go to: combatobscura.oscilloscope.net

“The beauty of the film is its realness. All the footage is taken directly from his camera. Lagoze went on to compile all the events he felt were representative of his experience. He shows the gun fights, the cursing, the shouting, the laughter, the fear and the hostility of the men in the war. Nothing is withheld.”Jessica Duffield, VOX MAGAZINE

“War is not fought but lived, and this is as close to first-person as one can get without being there. COMBAT OBSCURA sinks deeper into darkness as it progresses, as the utter pointlessness and futility of America’s presence in Afghanistan overwhelms the troops. While we are initially invited to empathize with the Marines, their jokey comradery gives way to vicious menace. There is no apparent mission, just a loop of injuries and reprisals against an amorphous outside threat. The final two scenes are a despairing diptych. In the first, the men realize they’ve killed an unarmed shopkeeper and plot to cover it up. In the second, one of them is seriously wounded in a firefight and they scramble to get him airlifted to aid. There is no point to any of it, just horror. That is all there is to this war, and no uplifting words will ameliorate it.” – Daniel Schindel, THE FILM STAGE

“This Marine-made war documentary is so raw the corps doesn’t want you to see it. One of most genuine looks at what the Forever War was like for those who waged it.”James Clark, TASK AND PURPOSE