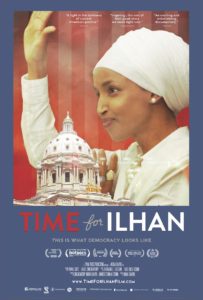 the long time incumbent who served in the legislature for 43 years. Also in the race is an eloquent male Somali activist who challenged but lost to Kahn in 2014. All three candidates run as progressive Democrats. Ilhan Omar’s win means she will become the first Somali-American, Muslim woman to hold state office in the United States, an especially dramatic prospect given the anti-Muslim rhetoric that brewed in the lead up to the 2016 Presidential race. Although the U.S. failed to elect its first female president, one woman still made history. Ilhan Omar’s story will present a counter narrative to the pervasive negative portrayal of both

politics and Muslim immigrants and women in America. It will also raise questions about barriers to access to the political process in this country, and offer a refreshing and inspiring example of overcoming them. Director Norah Shapiro joins us for a conversation  about her intimate and invigorating look into the quixotic campaign and the multi-faceted life of a Somali refugee seeking to bring a new voice and perspective into an evolving American paradigm.

For news and updates go to: timeforilhanfilm.com

Host a screening! Go to timeforilhanfilm.com/host

From the Time for Ihan website: Kicking off on International Women’s Day, March 9th, 2019, and continuing through the 2020 elections, we are partnering with grassroots groups, national organizations, and schools and universities to host dynamic screening events that connect audiences with opportunities to take action in their own communities.

“Although it’s too soon to say what Ilhan Omar’s long-term impact on American politics will be, her very presence represents the infusion of new energy that many believe the Democratic Party has long been in need of. She is now part of a new wave of politicians—and many more who’ve been inspired to run since the election of Donald Trump. And if she truly is the progressive politician Time for Ilhan portrays, maybe we still have a reason to say, ‘I’m with her.’” – The Root

“Observing her life on the electoral trail with remarkable intimacy and access, this rousing documentary offers rare insight into this formidable newcomer’s journey as she takes on a 43-year incumbent and redefines the face of American politics.” – The List

“She is so eloquent and passionate, I have no doubt that her platform will bring her to the world’s attention in the very near future. She is one to watch for.” – Musee Magazine