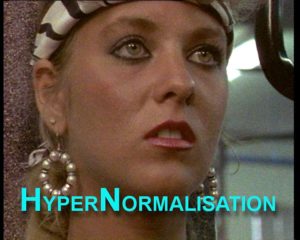 In Adam Curtis’s acclaimed BBC documentary, HyperNormalisation, he employs masterfully edited found footage to investigate how, at a time of confusing and inexplicable world events, politicians and other power brokers construct new, slippery realities. Curtis tells a story that begins in 1975 in New York and Damascus, and ends with today’s world.

Adam Curtis on his work and HyperNormalisation: ”Those in power in society – the politicians, the journalists, the experts – maintain their power by telling us stories about the world. Those stories tell us what is true and what is false, what is right and wrong, and what is real – and what is illusion. But there come times when these stories begin to break down. And people start to distrust those in power – and their definition of what is real and what is fake. At that point you enter the Zone. The film Hypernormalisation tells the story of how we got to this place. It is also about the new systems of power that we cannot see – because we are trapped inside the Zone.”

Adam Curtis is an award-winning widely influential documentary filmmaker and journalist. He works for BBC television in London. His acclaimed films include The Century 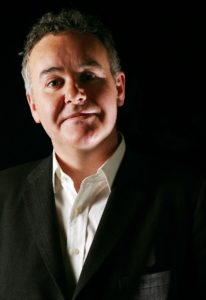 of the Self (2002), The Power of Nightmares  (2004), All Watched Over by Machines of Loving Grace (2011), Bitter Lake (2015) – and most recently HyperNormalisation..  His films go back into the recent past to tell dramatic stories that lead the viewer to look again at the present day – and help them make sense of it. They try to show how power really flows in today’s complex society, not just through politics – but through science, public relations and advertising, psychology, computer networks and finance. Curtis has also done live shows with the immersive theatre group Punchdrunk and the band Massive Attack. His films have been shown at the Cannes film festival and have won awards – including 6 BAFTAs. Curtis joins us to talk about power, journalism, the world as is understood today and his work.

For news and updates go to: bbc.co.uk/blogs/adamcurtis

“I want to be Adam Curtis when I grow up.” – Oscar-winning filmmaker Errol Morris

“Hypernormalisation” feels like a greatest hits compilation of familiar Curtis themes — the decline of political power in a corporate age, the rise of global terrorism, America’s tortuous secret history in the Middle East, the hollow narcissism of cyberspace. But this also is a dazzling and thought-provoking film that blurs the line between op-ed journalism and mesmerizing audio-visual art.” – Hollywood Reporter

“‘HyperNormalisation’ is a searching and essential document of our times, a movie that leaves us, as in its opening shot, groping through a pitch-black forest with only a flashlight, wondering what lies in all that terrifying darkness that no one has found a way through.” – The New Yorker