DRAGGED ACROSS CONCRETE tells the tale of two policemen, one an old-timer, 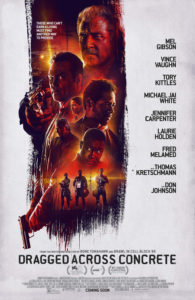 Ridgemen, (Mel Gibson), the other his volatile younger partner, Anthony, (Vince Vaughn), who find themselves suspended when a video of their strong-arm tactics become the media’s cause du jour. Low on cash and with no other options, these two embittered soldiers descend into the criminal underworld to gain their just

due, but instead find far more than they wanted awaiting them in the shadows. What bad things will good men do for their families? In the hardboiled world of DRAGGED ACROSS CONCRETE, who lives, who dies, and who gets rich is a fate written in bullets. Director S. Craig Zahler stops to talk about his stylishly brutal, modern day film noir and his determination to tell this story on his own terms.

For news and updates go to: Lionsgate.com / Dragged Across Concrete

“Anchored by three brilliant central performances, Dragged Across Concrete is an interesting, unpredictable movie that presents two plots that feel like we’ve seen them before and then zigs when we expect it to zag.” – Sean Fallon, Film Inquiry

“S. Craig Zahler is a singular voice in cinema, one who is willing to take pulp concepts and craft them into unflinchingly violent features.” – Niall Browne, Movies in Focus

“Few filmmakers come to mind who could orchestrate these slow-burning set pieces with such precision; it’s like watching a chess game in which everyone thinks they’re a king but most of them are pawns” – Michael Nordine, IndieWire