Of all the divisions in America, none is as insidious and destructive as racism. The powerful documentary THE LONG SHADOW takes a shockingly candid look at America’s 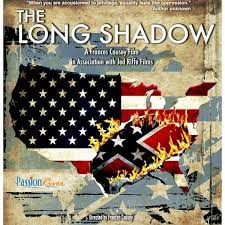 original sin – slavery — and traces the history of slavery from the country’s founding, up through its insidious ties to racism today. We witness from the moment of America’s birth, how slavery was embedded in principal structural elements of society, and yet, even as slavery ended, these systems still operate today in various forms, carrying out their original purpose  – to diminish the social role of black people and keep them in a perpetual state of suffering. Director Frances Causey and Producer Sally Holst, both privileged daughters of the South, were haunted by their families’ slave-owning pasts. They grew up in a time when white superiority was rarely questioned, and challenging this norm was often met with deadly consequences. Rejecting the oft-told romanticized version of early U.S. history, they embarked on a journey of hidden truths and the untold stories of how America – driven by the South’s powerful political

influence – steadily, deliberately and with great stealth,  established white privilege in our institutions, laws, culture and economy. From New Orleans to Virginia, Mississippi and Canada, they traveled the roads of oppression, suppression, and even hope to reveal the direct link from early slavery, Jim Crow and strong-arm Southern politics to the current racial strife and division we face today. Director and Frances Causey is an Emmy-award winning journalist and documentary filmmaker who began her career with CNN. Her 2012 documentary feature, “Heist: Who Stole the American Dream?”was a New York Times Critic’s Pick and is currently seen in over 50 countries. Causey was honored with the Women’s International Film and Television Jury Award for her work on Heist. Frances Causey joins us to talk about the stain of slavery and the legacy of racism that continues to torment the American Promise.

For news and updates go to: thelongshadowfilm.com

Host a screening at: thelongshadowfilm.com/host-a-screening

“The Long Shadow is a moving personal and informative history of anti-Black racism in the US packed with revealing details and analysis and leading us towards understanding, healing, and commitment to work for racial justice. A must see for white people concerned about racial equity and social justice.” ~ Paul Kivel, Co-founder, Showing Up for Racial Justice

“If you want to know the true hidden history of the evil that slavery cast over America, and how it continues to this day, you must watch this movie.” ~ Thom Hartmann, The Thom Hartmann Show