CRIP CAMP explores the revolution that blossomed in a ramshackle, unorthodox summer 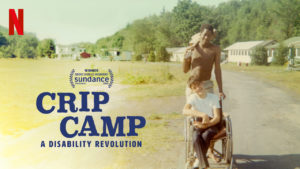 camp for teenagers with disabilities in the early 1970s, transforming their lives and igniting a landmark movement. This joyous and exuberant documentary, co-directed by Emmy®-winning filmmaker Nicole Newnham and sound mixer (and former camper) James LeBrecht, draws from a jaw-dropping store of archival footage to show how the campers’ bonds endured as they migrated West to Berkeley, California — a promised land for a

growing and diverse disability community — where they realized that by working together they might secure life-changing accessibility for millions. CRIP CAMP arrives the same year as the 30th anniversary of the Americans with Disabilities Act, at a time when the country’s largest minority group still battles daily for the freedom to exist. Co-directors Nicole Newnham and Jim LeBrecht join us for a lively conversation on the personal and professional journey behind the making of CRIP CAMP and the remarkable people who fought and those who continue to fight for human rights.

For news and updates go to: cripcamp.com

About the filmmakers: Jim LeBrecht is the founder of Berkeley Sound Artists (BSA), an audio postproduction house. Films that he has mixed have screened at film festivals including Sundance, Tribeca, SXSW, Telluride and Berlin. Credits include Unrest, The Force, Audrie and

Daisy, The Waiting Room, The Devil and Daniel Johnston and We Were Here. LeBrecht started his career in the theater as the resident sound designer at the Berkeley Repertory Theatre for 10 years. He’s also designed sound for the American Conservatory Theatre, The Public Theater in NY, La Jolla Playhouse and the Old Globe Theatre in San Diego. Jim co-authored (with Deena Kaye) the book Sound and Music for the Theatre: the art and technique of design. Now in its 4th edition, the book is used all over the world as a textbook. Jim’s work as a disabled rights advocate began in his teens as a member of Disabled in Action, a pioneering disability rights group. While at UC, San Diego, he helped found the Disabled Students Union. Jim is currently a board member at the Disability Rights Education & Defense Fund, a leading organization working for the rights of the disabled through education, legislation and litigation.

experience, Collisions, directed by artist Lynette Wallworth. Among her films are The Revolutionary Optimists, winner of the Sundance Hilton Sustainability Award, and Sentenced Home. Both films aired on PBS’ series Independent Lens. Nicole instigated, co-produced and directed the acclaimed documentary The Rape of Europa, about the Nazi war on European culture, which was nominated for a WGA award and shortlisted for the Academy Award. She is known for working to achieve concrete impact from the power of the stories she tells, and co-founded a story and data-mapping platform for youth – linked to The Revolutionary Optimists, own communities, called Map Your World (www.mapyourworld.org).

“The spirit of revolution – righteously angry yet full of bonhomie, demanding but generous in its reach – is alive and well in the film. As, one hopes, it is everywhere else.” – Richard Lawson, Vanity Fair

“Using a treasure trove of archived footage and colorful contemporary interviews, Lebrecht and Newnham weave together a punchy, straightforward and inspiring documentary that is greater than the sum of its parts.” – Ashlie D. Stevens, Salon.com

“”Crip Camp” is thus a moving and passionate tribute to the herculean efforts it took… to bring about ramps, curb cuts and other essential accessibility provisions.” – Justin Chang, Los Angeles Times