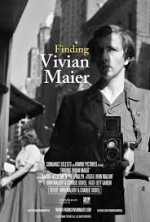 A mysterious nanny, who secretly took over 100,000 photographs that were hidden in storage lockers and discovered decades later, is now considered among the 20th century’s greatest photographers. Maier’s strange and riveting life and art are revealed through never before seen photographs, films, and interviews with dozens who thought they knew her. Co-directors John Maloof and Charlie Siskel join us to talk about a woman who fiercely protected her privacy and asserted her independence from the bourgeois values of the families she lived with. In FINDING VIVIAN MAIER, a nanny from Chicago has taken her place among the most accomplished photographer’s of the 20th Century.

For more on Finding Vivian Maier go to: http://www.findingvivianmaier.com/

“This initially playful, ultimately haunting look at the once-secret career of street photographer Vivian Maier is an aptly obsessive study of obsession.” – Variety

“…fascinating interviews with the people who knew her — or, more accurately, didn’t know her. A spellbinding, thoughtful examination of the artistic temperament.” Flavorwire