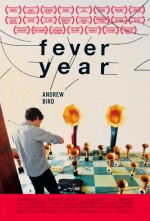 Filmed during culminating months of the acclaimed singer-songwriter’s most rigorous year of touring, Andrew Bird crosses the December finish line in his hometown of Chicago – feverish and on crutches from an onstage injury. Is he suffering hazards of chasing the ghost of inspiration? Or merely transforming into a different kind of animal “perfectly adapted to the music hall?” FEVER YEAR is the first to capture Bird’s precarious multi-instrumental looping technique and features live performances at Milwaukee’s Pabst Theater with collaborators Martin Dosh, Jeremy Ylvisaker, Michael Lewis and Annie Clark of St. Vincent. Director Xan Aranda will join us to talk about her beautiful film and the joys of collaborating with a gifted artist.

“It’s a truly amazing feat to… capture the process of a year-long music tour as well as the personal life of a musician while simultaneously preserving his privacy and leaving the viewer satisfied.” – The Indie-Verse / Nico Martini

“A gently illuminating look at a brilliant maverick musician… captured with grace and delicacy.” – The Hollywood Reporter / David Rooney