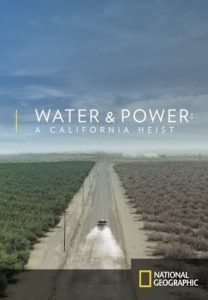 This thrilling investigation uncovers the high-level corruption behind California’s long-standing water crisis. Sweeping cinematography of California’s harsh, dry landscape asks us to visualize a fight for water in what feels like a modern day Chinatown. Emmy award-winning  filmmaker Marina Zenovich (“Roman Polanski: Wanted and Desired”) peels back the layers of California’s convoluted water structure—wealthy water barons show their guilty hand in exploiting the state’s resource, while small farmers and neighboring towns endure debilitating drought. We see luxury crops, like almonds, on the rise and groundwater contamination increasing tenfold, pitting backroom business dealings against human and environmental costs. Water & Power: A California Heist, is a National Geographic documentary film executive produced by Academy Award winner Alex Gibney and produced by Jigsaw Productions. California has the sixth-largest economy in the world. It is home to the global entertainment and technology capitals, one of the most productive farm belts mankind has ever known and nearly 39 million residents. But the state’s continued survival is dependent on a consistent supply of fresh water, a dwindling public resource with a long history of mismanagement. Water & Power: A California Heist dives deep into the past, present and future of California’s endangered lifeblood. This natural resource is only growing more valuable as the new war for water is already upon us. This daring and extremely timely documentary asks us to question who has control of our access to our water. Director Marina Zenovich (Roman Polanski: Wanted and Desired) joins us to talk about the “how and why” of the looming disaster that awaits California residents.

For news and updates go to: nationalgeographic.com

“Guided by the work of a handful of burr-like journalists, this dense and disturbing documentary dives into the regulatory quagmire of California water rights with more courage than hope.” – Jeannette Catsoulis, New York Times

“The history of California is written in water, and in the shady deals that allow a few to control it, director Marina Zenovich shows in her fact-packed documentary Water & Power: A California Heist.” – Sean P. Means, Salt Lake Tribune