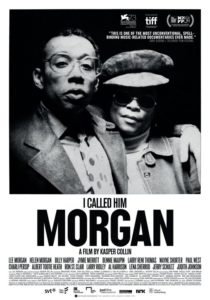 On a snowy night in February 1972, legendary jazz trumpeter Lee Morgan was shot dead by his common-law wife, Helen, during a gig at a club in New York City. The murder sent shockwaves through the jazz community, and the memory of the event still haunts the people who knew the Morgans. Helen served time for the crime and, following her release, retreated into obscurity. Over 20 years later, a chance encounter led her to give a remarkable interview. Helen’s revealing audio “testimony” acts as a refrain throughout the film, which draws together a wealth of archival photographs and footage, interviews with friends and bandmates and incredible jazz music to tell the ill-fated pair’s story. Part true crime tale, part love story, and an all-out musical treat, I CALLED HIM MORGAN is a chronicle of the dramatic destinies of two unique personalities and the music that brought them together. Swedish filmmaker Kasper Collin’s I CALLED HIM MORGAN is also a love letter to two unique personalities and the music that brought them together. A film about love, jazz and America with cinematography by Bradford Young (DOP, Selma).

For news and updates go to: icalledhimmorgan.com

“The interview-“an amazing document,” Collin says-enriches the documentary and transforms it into a story within the story.” – Michael J. Agovino, Village Voice

“This is not a lurid true-crime tale of jealousy and drug addiction, but a delicate human drama about love, ambition and the glories of music.” – A.o. Scott, New York Times

“Collin’s film brings out these stories with a wealth of details energized by the experiences and the insights of his interview subjects as well as an engaging range of archival images and clips.” – Richard Brody, New Yorker

“Quite simply, the greatest film about a jazz musician ever. Do not miss this story of a career cut short by a “Frankie and Johnny” tragedy.” – Louis Proyect, CounterPunch