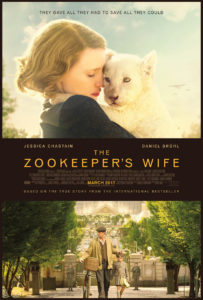 The time is 1939. The place is Poland, homeland of Antonina (two-time Academy Award nominee Jessica Chastain) and her husband, Dr. Jan Żabiński (Johan Heldenbergh). Devoted to each other, the couple thrive as personal and professional partners; the Warsaw Zoo flourishes until the entrance is slammed shut and the zoo is crippled in an attack as the entire country is invaded by the Germans. The couple is forced to report to the Reich’s newly appointed chief zoologist, Lutz Heck (Daniel Brühl, Captain America: Civil War). Heck envisions a new, selective breeding program for the zoo. Antonina and Jan fight back on their own terms, and covertly begin working with the Resistance – realizing that their zoo’s abandoned animal cages and underground tunnels, originally designed to safeguard animal life, can now secretly safeguard human life. As the couple puts into action plans to save lives out of what has become the Warsaw Ghetto, Antonina places herself and even her children at great risk. Director Niki Caro (Whale Rider, North Country) directs the movie from a screenplay by Angela Workman, adapted from Diane Ackerman’s nonfiction book of the same name and based on Antonina’s diaries. Director Niki Caro joins us for a conversation on her beautiful and moving historic drama.

For news and updates go to: focusfeatures.com/thezookeeperswife

“A fundamental sense of empathy may not be especially cinematic, but that’s no reason to ignore it (and Chastain, who strikes a wonderful balance with Heldenbergh, is masterful at expressing stoicism without ever tipping into sanctimony).” – David Ehrlich, IndieWire

“Subtle yet striking, this is a film that is filled with the power of exquisitely executed storytelling.” – Chelsey Grasso, The Film Stage

“”The Zookeeper’s Wife” may have appeal to history buffs of that turbulent time but the story has a more universal appeal about love and compassion for all animals, even us humans.” – Robin Clifford, Reeling Reviews