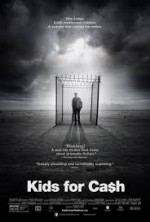 KIDS FOR CASH is a riveting look behind the notorious scandal that rocked the nation when it first came to light in 2009. Beginning in the wake of the shootings at Columbine, a small town in Luzerne County, Pennsylvania elected a charismatic judge who was hell-bent on keeping kids in line. Under his reign, over 3,000 children were ripped from their families and imprisoned for years for crimes as petty as creating a fake MySpace page. When one parent dared to question this harsh brand of justice, it was revealed that the judge had received millions of dollars in payments from the privately-owned juvenile detention centers where the kids—most of them only in their early teens—were incarcerated. Producer Lauren Timmons joins us to talk about his remarkable, frightening film and the on-going wreckage done by a small cadre of judges to the lives of thousands of families.

“Without sensationalizing his already scandalous material, Mr. May arranges the contributions of reporters, lawyers and anguished relatives of young offenders into a shocking and impartial portrait of justice denied and childhoods erased.”  – Jeanette Catsoulis, New York Times

“Kids for Cash is… an honest investigation—unprejudiced toward its subjects, thorough in its research, comprehensive in its intellectual framework—and it’s a tragedy.” – The Nation