Tucked in the trees of Oregon’s Mount Hood, an introspective young snowboarder camps alone, anticipating a winter of adventure and self-renewal. In Cambria Matlow’s 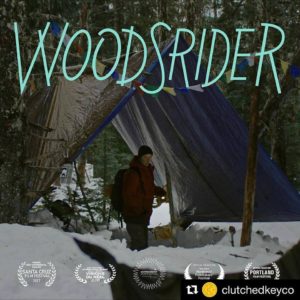 latest documentary WOODSRIDER a tenacious, 19-year old Sadie Ford operates within the poetic persona of a searching pioneer. Her footsteps track over the town of Government Camp’s mountain landscape, her dog Scooter her only constant companion. Deep among the Douglas firs Sadie snowshoes to build her nestled tentsite, a place she feels more at ease than anywhere with four walls. Riding sessions and house parties in town provide brief

breaths of social interaction and connection, but otherwise she chooses to spend time in solitude. Sadie’s simple quest for joy is tempered by melancholy when increasingly warm temperatures on the mountain cause rain to replace snow, and the winter season grows shorter. Striking a youthful yet elegiac tone, WOODSRIDER is a meditative film about identity, home, and the way that human experience echoes that of the natural world. Director Caitland Matlow joins us to talk about the immersive, intimate look into the life of a woman determined to stake out her own path.

For news and updates go to: woodsriderfilm.com

one of the most intimate docs you’ll see this year. Hauntingly beautiful.” – Walker Macmurdo, Willamette Week

“Stunning camerawork, lovingly composed with visual fluidity. This film will have a lot of appeal to audiences who understand the thrall of the wilderness. It’s a rare capture to see a woman, alone in the elements, strong, independent and totally at ease with her space. The film provokes a lot of thought about our ‘place’ in the natural – and unnatural – world.” – Ashland Independent Film Festival