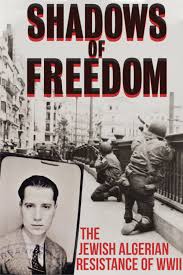 1942 in Algiers, which helped change the course of WWII, yet remains largely forgotten. These 388 resistors – mostly young and inexperienced – almost haplessly ended up supporting the Allies in North Africa. In the process they paved the way for a successful invasion of Algiers by the U.S., but also helped to save the lives of over 500,000 Jews in North

Africa, targeted by Hitler’s Final Solution. This was all part of OPERATION  TORCH the joint American/U.K. mission that was to be the Allies’ first successful strike against the Nazis. This largely forgotten

military operation remains to this day as the longest invasion in the history of conflict. Co-directors and co-producers Amos Carlen and Aline Robichaud join us to talk about a little known but critically important chapter of French resistance, American and British military strategy and the courageous contributions made by Jewish resistance fighters.

For news and updates go to: shadowsfreedom.com/home

* OPERATION TORCH was the 1942 Anglo-American invasion of North Africa (Algeria and Morocco). It was the 1st joint operation of the U.S. and the U.K., the 1st Allied success against the Nazis and, until D-Day, the largest military operation ever undertaken. It was a hugely significant turning point in the war – aided greatly by the resistance in Algiers – yet remains largely forgotten. SHDOWS OF FREEDOM unveils the importance of Operation Torch in the hopes of highlighting this historical moment that stands as a remarkable achievement by America and Great Britain. This powerful alliance made victory a certainty.