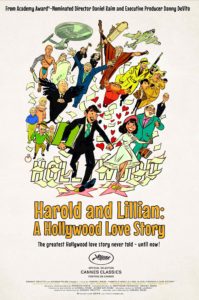 In the new documentary Harold and Lillian: A Hollywood Love Story, Award-winning director Daniel Raim (The Man on Lincoln’s Nose, Something’s Gonna Live) brings to life a fascinating and moving account of the romantic and creative partnership of storyboard artist Harold Michelson and film researcher Lillian Michelson: two unsung heroes of Hollywood’s Golden Age. Harold and Lillian: A Hollywood Love Story spans the Golden Age of Hollywood through New Hollywood and beyond. It’s a portrait of a time, and an intimate chronicle of their epic journey of life, love, family, and making great movies. Harold and Lillian worked on hundreds of renowned films including The Ten Commandments, The Apartment, The Birds, Who’s Afraid Of Virginia Woolf?, The Graduate, Rosemary’s Baby, Fiddler On The Roof, Scarface, Full Metal Jacket and many more. Although the couple was responsible for some of Hollywood’s most iconic examples of visual storytelling, their contributions remain largely uncredited. Through an engaging mix of love letters, film clips and candid conversations with Harold and Lillian, Danny DeVito, Mel Brooks, Francis Ford Coppola and others, this deeply engaging documentary from Academy Award®-nominated director Daniel Raim (who first encountered Harold Michelson as a student at the AFI Conservatory in 1997), chronicles their remarkable marriage and extraordinary careers through six decades of movie-making history.  Harold and Lillian’s story humanizes Hollywood—an industry sustained by numerous hard-working cinema artisans; master craftsmen and craftswomen who give their lives, their genius and their hearts to the movies. Beyond Harold and Lillian’s contribution to cinema, their story can’t be told without weaving in their 60-year marriage—a creative, challenging, and profoundly loving partnership. Director Daniel Raim stops by for a conversation on his loving tribute to a beguiling pair of artists, partners and lovers.

For news and updates go to: Harold and Lilian: A Hollywood Love Story

“CRITICS’ PICK! Charming… Like flipping through misplaced leaves in a photo book, the documentary maintains a free-flowing tone as it uncovers the work that went into creating some of the indelible scenes in Hollywood history.” – Monica Castillo, The New York Times

“For an hour and a half, this charming little movie, with its chatty talking heads and its sweet-natured subjects, offers a glimpse into the lives of two fascinating people whom I had never heard of, and who shared an unlikely life filled with achievements and setbacks, wonder and pain.” – Bilge Ebiri, The Village Voice

“One of the very best documentaries ever made about movies…I have rarely seen any movie, fact or fiction, that was quite so suffused with love—movie love and human love—as this one.” – David Noh, Film Journal