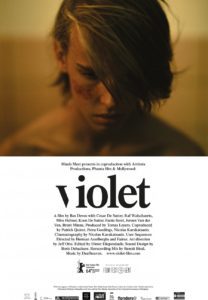 In his first feature film Belgium-based director Bas Devos (We Know, Taurus) 15-year-old Jesse’s best friend, Jonas, is violently attacked at random during a routine trip to the mall. The attackers do not confront or acknowledge Jesse, and Jesse does not engage or pursue the attackers… he simply backs away. Why did this happen? Could Jesse have done more? Did he have an obligation? These are the questions posed by VIOLET, a carefully calibrated character study of the process of coping in the midst of senseless trauma. In the aftermath of Jonas shocking death Jesse has to face his family and friends from the BMX riders crew and explain the unexplainable – how he feels about it. Jesse’s parents and friends all seem to have their own (often destructive) reactions to the incident, but it’s the parents of the victim with whom he develops a strange connection. Shot partially on 8-perf 65mm film by acclaimed cinematographer Nicolas Karakatsanis (Bullhead, The Drop), Director and writer Bas Devos’ meticulously calculated debut is constructed like a series of lush photographs. In each of the film’s compositions we see a sophisticated mosaic of loss, the permanence of trauma, and the tumult of youth. Winner of the Grand Jury Prize at the 2014 Berlinale, VIOLET looks at Jesse’s inability to answer their questions gradually isolate Jesse and the growing grief prevents him from finding comfort. Director Bas Devos joins us for an thoughtful conversation on the power of cinema and the space in between exposition and observation.

“It bores into the mourning process and its piquant combination of emotional numbness and sensory vulnerability, rigorously avoiding finding an easy way out of this quagmire.” – Christopher Gray, Slant Magazine

“Violet is deft and rigorous, oblique to the point of inscrutability.” – Calum Marsh, Village Voice

“Beautifully shot images speak way louder than words in this Belgian drama about a teenager’s mourning process. If Gus Van Sant had grown up in Flanders (…) he might have directed something like Violet. The final image, an 8-minute sequence shot, is a wonder to behold and ends the film on a perfect and perfectly poetic note.” – Boyd van Hoeij, The Hollywood Reporter