Filmworker is an observation on how legends and legendary works are created. The complex, productive and interdependent relationship between Leon Vitali and 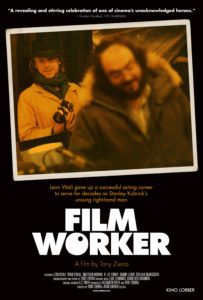 Stanley Kubrick was founded on devotion, artistic passion, sensibility, sacrifice and the grueling joy of the creative process. It’s a rare person who would give up fame and fortune to toil in obscurity for someone else’s creative vision. Yet, that’s exactly what Leon Vitali did after his acclaimed performance as ‘Lord Bullingdon” in Stanley Kubrick’s Barry Lyndon. On the brink of a successful acting career, the young actor stepped back from the limelight in order to become the right-hand man to perhaps the most influential and ground-breaking filmmaker of his time, Stanley Kubrick. Vitali played a crucial part in the director’s career, working tirelessly in close collaboration with Kubrick in helping to

make and maintain his extraordinary legacy of work. Vitali’s unique working relationship with Kubrick is explored through anecdotes about his candid, funny (and sometimes shocking) experiences with the director, enhanced with a rich variety of previously-unseen archival materials including photos, videos, letters and notebooks from Vitali’s personal collection, and brought together through interviews with actors, family, and key film industry professionals who worked with both Kubrick and Vitali. Filmworker. Director Tony Zierra joins us to talk about the creative process, Stanley Kubrick and his closest and most dedicated collaborator, Leon Vitali, who once described his own occupation simply as “Filmworker.”

For news and updates go to: kinolorber.com/film/filmworker

“Movie love at its purest. A celebration of its anonymous inhabitants’ role in bringing our collective dreams to life.” – Ann Hornaday, The Washington Post

“Five stars! Tender. A revealing and stirring celebration of one of cinema’s unacknowledged heroes.” – Gwilym Mumford, The Guardian

“The ultimate fan story: a tale of what it means to live vicariously through a genius.” – Ben Kenigsberg, RogerEbert.com