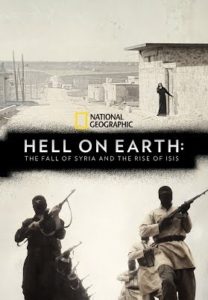 Hell on Earth: The Fall of Syria and the Rise of ISIS, Academy Award-nominated filmmaker and best-selling author Sebastian Junger and his Emmy-winning producing partner, Nick Quested, chronicle Syria’s descent into the unbridled chaos that allowed the rise of the Islamic State, better known as ISIS, in Iraq and Syria. The film follows as the peaceful anti-government protests of the Arab Spring turn into an armed uprising against the despotic regime of Syria’s President Bashar al-Assad, opening a door to a dangerous new enemy that preys on the disenfranchisement felt by Sunni Muslims in the Middle East and around the world.  In 2011, the Syrian people’s hopeful demonstrations for democratic reform were met with brutal repression by the Assad government, plunging the country into unending violence and despair. The resulting civil war has taken the lives of an estimated 400,000 people and uprooted millions more, creating a global refugee crisis. Conflict between the government, moderate rebel groups and ISIS jihadis have all but destroyed ordinary daily life in much of the country, and left the

nation’s largest metropolis, the ancient city of Aleppo, in ruins. Pulling from nearly 1,000 hours of stunningly visceral footage, the filmmakers provide a comprehensive picture of the conflict. Junger and Quested, who previously collaborated on a trio of films about the war in Afghanistan (Restrepo, “The Last Patrol” and “Korengal”), capture the Syrian war’s harrowing carnage, political and social consequences, and, most important, its human toll, while painting an alarming picture of the west’s role in the creation of ISIS. Hell on Earth co-director / co-producer Nick Quested stops by to talk about a war that is destroying the social and political fabric of the entire Middle East as well as the unspeakable horror being visited upon millions of innocents.

For news and updates go to: nationalgeographic.com/hell-on-earth

“The 100-minute film does a phenomenal job detangling the numerous scenarios that led to Syria’s civil war and current bloodbath, dispelling the notion that this conflict is too complicated for those not versed on the Middle East to understand.” – Lorraine Ali, Los Angeles Times

“”Hell on Earth” portrays the Syrian citizens, who live in a morass of civil war, with an emotional directness we can’t turn away from, to the point that it’s no longer possible to think of those citizens as “them.” They are us, or could be.” – Owen Gleiberman, Variety

“A mostly impressive array of experts … adds to the merciless clarity of this tragic picture.” – Glenn Kenny, New York Times