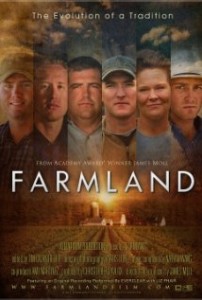 Farmland gives viewers a first-hand glimpse into the lives of young farmers and ranchers, their high-risk/high-reward jobs and their passion for a way of life that has been passed down from generation to generation. Most Americans have never stepped foot on a farm or ranch or even talked to the people who grow and raise the food we eat. Farmland takes an intimate look at the lives of six farmers and ranchers in their 20’s, all of whom are now responsible for running their farming business. The subjects in Farmland range from a sixth generation rancher, Brad Bellah, who runs beef cattle operations in Colorado and Texas to Sutton Morgan, a fourth generation farmer from California, who is the first person in his family to grow organic crops. FARMLAND is directed by Academy®, Grammy®, and Emmy® award-winning filmmaker James Moll (Foo Fighters: Back and Forth, Survivors of the Holocaust, Running the Sahara, and The Last Days). Director Moll stops by for a conversation on the future of an agricultural system that’s been the envy of the world.

For more news and updates on Farmland go to: www.farmlandfilm.com/