A mother struggles to accept the man her adult son has become. Directed by Leah Patterson, Bridget and Iain is the story of a mother’s love for her adult 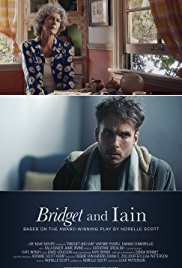 son. Bridget, (Vivienne Powell) who tries to do everything ‘right’, learns the limits of her power to manage others. Her son Iain (Damian Sommerlad) is charming, funny, and at times kind. He’s also an addict. Worried sick, Bridget finally gets support to make the changes that need to happen. The film charts the shifting relationship between Bridget and Iain as it reaches crisis point. It’s about maturation, change, and the struggle of trying to help someone you love while possibly enabling the very behavior you see as destructive. Bridget and Iain will resonate with anyone who has experienced the impact of any form of addiction in their lives or who have family members with mental health problems, or challenging relationships. Bridget and Iain Producer Diana C. Zollicoffer brought together an all-female crew for the production. Zollicoffer has also produced the environmental/social

justice documentary “Forgotten Bayou” numerous short films and web series including Schmoolie the Deathwatcher (winner of the 2015 San Antonio Film Festival). She recently directed the pilot episode of “Annny Minute Now” and assisted in developing the characters and storyline for the web series. She co-wrote “Free Agent: The Benjamin Brown Story” to be directed by Mykelti Williamson (Purge, Fences, Forest Gump), and has several projects that she is developing and two of which, with the intention to direct. Bridget and Iain recently screened at the Cannes Global Women of Color in Film Day and the Cannes Court Métrage Short Film Corner.  Producer Diana C. Zollicoffer joins us to talk about her award winning new film.