One of the distinguished voices in American independent film, Matthew Porterfield his back with a riveting new film. Sollers Point tells the story of Keith 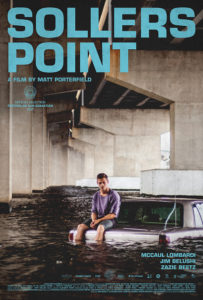 (McCaul Lombardi), a twenty-four-year-old newly released from prison and living with his father (Jim Belushi) under house arrest in Baltimore. Keith is struggling to reestablish himself, and break free of the bonds forged behind bars, within a community scarred by unemployment, neglect, and deeply entrenched segregation. His intentions are in the right place and he possesses

an aggressive desire to get back on his feet, but as he taps into all his familiar resources, he finds that he may be reverting to his old ways. Director / writer Matt Porterfield (Putty Hill, Hamilton, I Used to Be Darker) joins us for a conversation on the inherent hurdles to untangling from a criminal justice system and chronic social malaise that pulls people back into it’s stifling grasp.

For news and updates go to:sollerspoint.oscilloscope.net

“What “Sollers Point” accomplishes is a singular balancing act, compensating for the mood of heavy discouragement with only the slenderest thread of hope.” – Michael O’Sullivan, Washington Post

“‘Sollers Point’ is an intimate and wise character study, not only of an unformed young man but also of a neighborhood struggling to preserve itself in the face of economic decline.” – Joe Blessing, Playlist

“Sketching Keith’s inner conflicts and practical struggles with a graceful, mood-rich lyricism, Porterfield presses gently but painfully on some of the most inflamed and sensitive parts of American society.” – Richard Brody, New Yorker

“The journey is everything in Sollers Point… By film’s end, you understand that life, and hopefully growth, goes on. There’s real beauty in coming to grips with that.” – Chrs Kaltenbach, Baltimore Sun