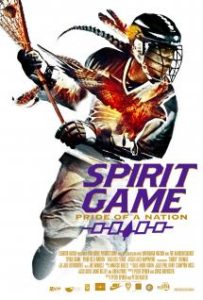 The origin of lacrosse belongs to the Native American Haudenosaunee (pronounced “ho DEE no Show nee”) who the French called Iroquois. To this nation of 125,000 people it is more than a game. It is a profound medicine, part of Iroquois cosmology and their lifeblood. Gifted players like the Thompson brothers and Brett Bucktooth Junior provide a spiritual sense of what it’s like playing Lacrosse with a “good mind”. They belong to a pool of only 400 Iroquois players, whereas team Canada and USA draw from over 600,000. In 2010 England hosted the World Lacrosse Field Championship and the United Kingdom refused to accept Haudenosaunee passports denying the Iroquois Nationals their chance to compete on the world stage. They have waited four years for the next championships in Denver. Out of the 83 nations taking part in the games, the Iroquois win the bronze medal for the first time. The Iroquois Nationals Lacrosse Team is not only among the world’s best, but ambassadors for their Nation’s sovereignty and recognition. In 2015, the Iroquois hosted the World Championships on Native soil for the first time ever, in which history, politics and culture all collided on the playing field before the eyes of the world. Co-directors Peter Spirer and Peter Baxter stop by for a conversation on their nuanced documentary as well as the history, culture and spirit of the of the Haudenosaunee people.

For news and updates go to: xlratormedia.com/film/spirit-game-pride-nation

“Spirit Game” covers a lot of territory, which gives it something of an all-over-the-map quality. But the subject matter is always enough to hold our attention.” – Kenneth Turan, Los Angeles Times

“… concentrates too heavily on game footage at the expense of context, yet it conveys a positive message while allowing viewers to appreciate the sport and its unique history.” – Todd Jorgenson, cinemalogue.com