MAYOR is a real-life political saga following Musa Hadid, the Christian mayor of 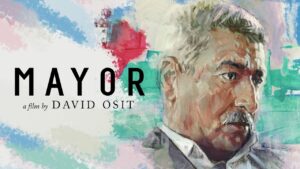 Ramallah, during his second term in office. His immediate goals: repave the sidewalks, attract more tourism, and plan the city’s Christmas celebrations. His ultimate mission: to end the occupation of Palestine. Rich with detailed observation and a surprising amount of humor,

MAYOR offers a portrait of dignity amidst the madness and absurdity of endless occupation while posing a question: how do you run a city when you don’t have a country?  MAYOR, director, producer, editor, cinematographer, David Osit joins us to talk about a most remarkable public servant, who spends much of his days greeting members of his community, visiting schools, meetings with staff on branding issues for Ramallah and having lunch with a grateful, but insistent constituent.

For news, updates and screenings go to: filmmovement.com/mayor  or: go to: mayorfilm.com

About the filmmaker – DAVID OSIT is an Emmy Award-winning documentary film director, editor and composer. He is an alumnus of the Berlinale Talent Campus and the Sundance Nonfiction Director’s Residency. David graduated from the Center for Middle Eastern and North African Studies at the University of Michigan, and studied Refugee Law at the American University of Cairo. He received his MFA in Social Documentary Film from the School of Visual Arts.

“Shows the West Bank as we rarely see it. A real-life political saga following Musa Hadid, the Christian mayor of Ramallah, during his second term. Filmed over 18 months, Mayor is aimed at Westerners, particularly Americans.” – Mary McNamara, Los Angeles Times

“IMPRESSIVE. ENGROSSING…HEARTENING. Mayor is a study in politics both micro and macro, showing what happens when the two come fatefully crashing together.” – Jordan Mintzer, The Hollywood Reporter

“A GRIPPING portrait of Ramallah’s beloved mayor, Musa Hadid, whose job consists of the mundane tasks of running a local government mixed with the extraordinary circumstances of navigating the repercussions of a geopolitical conflict. A sincere tale of a public servant who’s seeking to lead in a world that’s stacked against him.” – Alissa Wilkinson, Vox