An interview with MICHAEL PALMIERI the co-director of OCTOBER COUNTRY 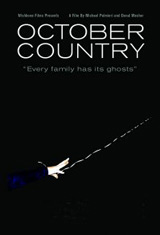 — a beautifully rendered portrait of an American family struggling for stability while haunted by the ghosts of war, teen pregnancy, foster care and child abuse. A collaboration between filmmaker Michael Palmieri and photographer and family member Donal Mosher, this vibrant and penetrating documentary examines the forces that unsettle the working poor and the violence that lurks beneath the surface of American life.  Combining the access only available to a family member with an intimate visual style of a filmmaker encountering the family’s dynamics for the first time, the film gives a deeply personal voice to the national issues of economic instability, domestic abuse, war trauma, and sexual molestation. As the Moshers do their best to confront their ghosts, we confront the broader issues that haunt us all in the continued struggle for the American Dream.  October Country is the Winner of the Sterling Grand Jury Prize at 2009 SILVERDOCS, 2009 Starz/Denver Maysles Brothers Award for Best Documentary, an Independent Spirit Awards Nomination for Best Documentary and five Cinema Eye Honors nominations, including Best Documentary.  Palmieri’s previous work includes his music video collaborations with artists such as Beck, The Strokes, Belle and Sebastian and the New Pornographers.