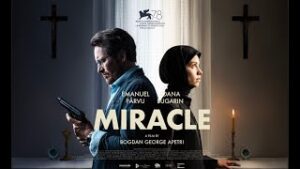 with the young, beautiful Cristina Tofan (Ioana Bugarin) sneaking away from an isolated convent. Working in the style of the Romanian New Wave, Apetri withholds key information about her motives as we follow her enigmatic journey, allowing tension to steadily build to a wavering precipice. The film’s second part follows Marius Preda (Emanuel Pârvu), a determined inspector retracing Cristina’s steps days after her

departure. Here, the narrative opens into both gripping police thriller and devastating social commentary, as Marius gradually uncovers clues and revelations leading not only to the unfathomable truth behind Cristina’s mysterious actions, but possibly, to an actual miracle as well. Director / writer Bogdan George Apetri joins us for a conversation on the multi-part story, of which Miracle is one part, that he is in the process of telling, the decision to lean into long tracking shots, recruiting a superb cast of actors into Miracle and Unidentified and his love of cinema.

For updates and screenings go to: filmmovement.com/miracle

About the filmmaker – Bogdan George Apetri is a Romanian filmmaker, born in 1976 in Piatra Neamt. In 2010, he directed PERIFERIC (Outbound). The film screened and won awards at prestigious festivals (Locarno, Toronto, Warsaw, Rotterdam, New Directors/New Films, Thessaloniki, Viennale). In 2019 he directed NEIDENTIFICAT  (Unidentified), which won the Special Jury Prize at the Warsaw International Film Festival. MIRACLE is his third feature film. As a producer working in the US, Bogdan produced many films that won awards at the Sundance Film Festival, were selected at Cannes and other major festivals and were distributed around the world. He teaches Directing at Columbia University in New York.

“A crime drama that could rekindle Romanian cinema. Bogdan George Apetri holds the audience and then, in the last scene, melts it with a single audacious teardrop.” – Owen Gleiberman, Variety
“Miracle lives up to its name, seamlessly blending narrative, style and technique with devastating results. Simple in scope, yet complex and precise in its execution, the result is a marvel befitting its title.” – Warren Cantrell, The Playlist
“Miracle retains its stranglehold for a swift-seeming two hours and ends with images that ensure plenty to chew over afterwards. The director’s approach is devastatingly effective.” – Allan Hunter, Screen Daily
“Bogdan George Apetri offers a rare, gripping Romanian thriller that tells an unpredictable, violent story while commenting on Romanian society.” – Ştefan Dobroiu, Cineuropa