To be a moﬃe is to be weak, effeminate, illegal. The year is 1981 and South 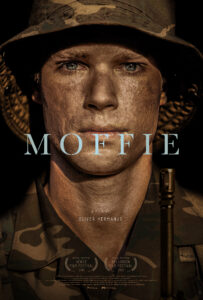 Kubrick’s FULL METAL JACKET while the beautifully acted love story provides a sharp contrast to the pervasive violence. Director and screenwriter Oliver Hermanus joins us for a conversation on how important it was to accurately capture to nexus of religion and the racist Apartheid regime and how the repressive culture it created made any relationship outside of it a treasonous act and how rewarding it was for him to be working with a gifted group of talented actors.

For news and updates go to: ifcfilms.com/films/moffie

IFC Films will release MOFFIE on Friday, April 9, 2021 in select theaters and on digital and VOD platforms.

About the filmmaker – Oliver HERMANUS (1983, South Africa) started his career as a press photographer. He studied at the University of Cape Town and received a scholarship for the University of California. In 2006 he was offered a private scholarship by film director Roland Emmerich to complete his MA at the London Film School. His earlier films Shirley Adams (2009) and Beauty (2011) were both screened in Rotterdam. In 2015, The Endless River became the first South African film to be nominated for the Golden Lion at the Venice Film Festival. His newest feature, Moffie (2019), premiered in the Horizons section of Venice Film Festival and won the Mermaid Award for best LGBTQI-themed film at the 60th edition of Thessaloniki International Film Festival.

“Hermanus digs deep into the South African psyche and teases out the contradictions within white society itself, especially the fracture between South Africans of English origin and Afrikaners.” – Kevin Maher, Times (UK)

“Moffie is another powerful addition to the Hermanus canon, and I can’t wait to see what this film maker will do next.” – Grethe Kemp, City Press (South Africa)

“Moments of aching tenderness and desire” – The Hollywood Reporter