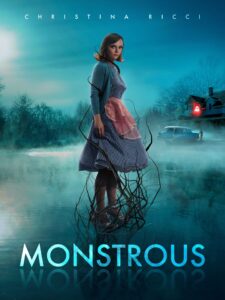 (Christina Ricci) and her seven-year-old son Cody when they flee her abusive ex-husband and try to settle into a new life in an idyllic and remote lakeside farmhouse. As they begin to settle into their new life, they encounter a bigger, more terrifying horror that threatens their already fragile existence and pushes their physical and mental well-being to the limit. MONSTROUS stars Christina Ricci (Buffalo 66, Monster, The Opposite of

For news and updates go to: screenmediafilms.net/Monstrous

To watch Monstrous go to: monstrousmovie.net

About the filmmaker – Chris Sivertson’s first film was All Cheerleaders Die (2001), which he also wrote and directed together with Lucky McKee. In 2003 Siverton and Kevin Ford co-directed a documentary titled Toolbox Murders: As It Was about the making of Tobe Hooper ‘s 2003 film Toolbox Murders. In 2006 Sivertson and Eddie Steeples co-wrote and co-directed The Best of Robbers, starring Steeples. Sivertson’s film The Lost (2006) adapted Jack Ketchum’s celebrated crime novel and has become a cult classic. His next film, I Know Who Killed Me (2007) starring Lindsey Lohan, was not well received by critics and went on to win several Golden Raspberry Awards. However, the film subsequently developed a cult following, with screenings at the Los Angeles Silent Movie Theater and the NuArt, and has been favorably compared by Boston Globe critic Ty Burr to Brian de Palma’s Sisters and  Body Double as well as the works of David Lynch. Sivertson has written and produced other films including Wicked Lake (2008). Sivertson also wrote and directed the 2013 sports film Brawler. All Cheerleaders Die is a 2013 horror film that was directed by Lucky McKee and Sivertson. The film is a remake of the 2001 film All Cheerleaders Die.

“Once one figures out what is going on in this movie, it actually is interesting. Much more of a psychological thriller than an actual horror movie.” – Tim Cogshell, FilmWeek (KPCC – NPR Los Angeles)

“The whole film hinges on Ricci’s performance and as such it provides a means for her to demonstrate that she’s still got what it takes.” – Jennie Kermode, Eye for Film

“For the most part this is a captivating mood piece, held together by Ricci’s take on a woman who is chasing an impossible idyll while being trailed by something dark and murky.” – Noel Murray, Los Angeles Times