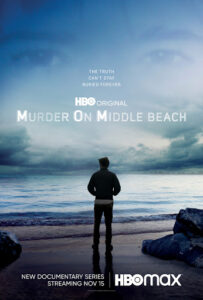 series directed by first-time filmmaker Madison Hamburg, presents Hamburg’s complicated journey as a young man determined to solve an unspeakable crime and the desire to absolve the people he loves, while looking for answers within his fractured family and community. On March 3, 2010, single mother Barbara Hamburg was found violently murdered near her home in the upper middle class enclave of Madison, Connecticut. Investigators speculated her murder appeared to be a crime of passion, but without enough evidence, the case grew

cold. Over the course of eight years, Barbara’s son, Madison Hamburg, interviewed his family members and many others, longing to learn more about his mother and gathering evidence in hopes of solving her murder, sending him into a deep web of buried familial secrets, connections to shadowy criminal figures,

and the uncovering of years-old resentments in his deceptively serene hometown. While Madison wrestles with troubling revelations about his mother, the most unsettling conflict comes from Madison’s obligation to bring into question those inside his community and members of his own family. Director Madison Hamburg joins us to talk about this deeply personal story of loss, discovery, anxiety and reconciliation.

For news and updates go to: hbo.com/murder-on-middle-beach

MURDER ON MIDDLE BEACH debuts on November 15 on HBO and will be available to stream on HBO Max.

Filmmaker’s Statement – At 18 years old, my worst fears came true when my sister called to tell me that my mother had been murdered, As much as I fought it, her death became a part of my life. Her memory faded and her case went cold, but I couldn’t accept that. Even if it meant sacrificing my own safety and sanity, I made my mother a promise when I started this project, ‘I will never let you be forgotten.’ It is less than what she would have done for me. – Madison Hamburg.

“Murder on Middle Beach is one of the most intense and emotional true-crime docuseries ever made.” – John Doyle, Globe and Mail

“Murder on Middle Beach is like watching a surgeon wield a scalpel on his own body, uncovering new layers of infection every time he cuts. It’s hard to say what’s more horrifying — that he keeps carving or that you keep watching.” – Glenn Garvin, Reason Online

“The emotional foundation of a torn-apart family is what strengthens Murder on Middle Beach but it’s also a fascinating mystery without the personal touch.” – Brian Tallerico, RogerEbert.com

“On the one hand, if anyone has the right to tell this story, it’s Hamburg. And the human toll of his investigation is very close to the surface in Murder On Middle Beach, particularly when his questions get more pointed later on.” – Katie Rife, AV Club