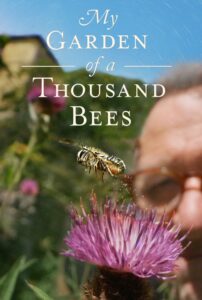 Dohrn’s MY GARDEN OF A THOUSAND BEES. Dohrn sets out to record all the bee

species in his tiny urban garden in Bristol, England. Filming with one-of-a-kind lenses he forged at his kitchen table, he catalogs more than 60 different species, from Britain’s largest  bumblebees to scissor bees the size of a mosquito. Over long months, Dohrn observes how differences in behavior set different species apart. He eventually gets so close to the bees he can identify individuals by sight, documenting life at their level as we have never seen it before. Among the many amazing

moments captured in My Garden of a Thousand Bees, are bees laying tiny eggs preparing for the next generation, green-fanged spiders feasting on male flower bees and a female yellow-faced bee  attacking a Gasteruption wasp to protect her nest. Other fascinating behavior featured in the film

includes two male bees fighting each other over a female, different species of bees competing over territory and one busy bee building a nest with a shell and hundreds of sticks. Intrigued by the intelligence of one particular wood-carving leafcutter bee, Dohrn dubs her “Nicky” and sees life at her level as she leaves a lasting legacy in the garden. Director and narrator Martin Dohrn (Age of Big Cats, Tera Mater) joins us for a conversation on his own fascination with bees, what inspired into this deep dive into their world and the fundamental importance of these inspiring creatures in sustaining human life.

For more go to: mygardenofathousandbees.org

Stream MY GARDEN OF A THOUSAND BEES for free on PBS, visit  mygardenofathousandbees.org.

Winner of Behavior, Editing, Producer and Director at the 2022 Golden Panda Film Festival, which honors the best international wildlife film of the year

About the filmmaker – Martin Dohrn is an award-winning filmmaker who has been producing specialist landmark natural history films for over 30 years. Martin’s roles extend to Director, Executive Producer, and writer, but today he is still focused on camerawork. During this time, he has devised game-changing techniques in low-light and macro filming, allowing audiences remarkable new insights into the natural world. Leading the field with his range of world-renowned tech, he developed his Colour Starlight Camera, delivering colour footage from some of the darkest locations on Earth, and Frankencam – micro-motion control for filming small things in the wild. Martin’s ground-breaking films include Mara Nights and Killer Ants for BBC, Night of the Lion for National Geographic and David Attenborough’s Light on Earth for Terra Mater Factual Studios, CuriosityStream and BBC. The National Geographic film Great Migrations earned him an Emmy for craft cinematography, adding to the multiple awards earned for his innovative children’s series Smalltalk Diaries, as well as three BAFTA nominations.

About the studio – HHMI Tangled Bank Studios is a mission-driven production company that crafts exceptional films where science is a lens for making sense of our world, while inspiring awe and wonder. Celebrating its 10th anniversary, the studio, led by biologist and acclaimed author Sean B. Carroll, is uniquely positioned to shine a light on some of the most significant scientific challenges and breakthroughs of our time. Recent films include Emmy Award-winners The Serengeti Rules and The Farthest – Voyager In Space; Emmy-nominated Nature’s Fear Factor and My Garden of a Thousand Bees; Peabody Award winner Inventing Tomorrow; and All That Breathes, the only documentary to win best documentary at the Sundance, Cannes, and London film festivals. To extend the reach and impact of each film, the studio undertakes educational and public outreach efforts in partnership with mission-driven organizations. For more go to: TangledBankStudios.org.