MY OLD SCHOOL re-tells the unbelievable story of 16-year-old Brandon Lee.  In 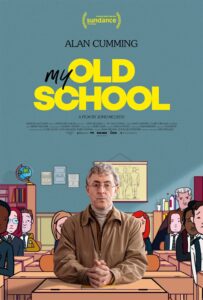 1993 Brandon enrolled at Bearsden Academy, a secondary school in a well-to-do suburb of Glasgow, Scotland. What followed over the next two years would become the stuff of legend. Brandon had been privately tutored in Canada while he accompanied his mother, an

opera diva, on tour before her tragic  death. The preternaturally bright student surprised teachers by blazing toward his goal of entering medical school, displaying a wealth of knowledge beyond his years. Brandon found friends despite his initial awkwardness, taking bullied students under his wing, introducing  classmates to seminal retro bands, and even starring in the school’s production of South Pacific. But then his unbelievable secret was revealed.

Filmmaker Jono McLeod returns to his old school for a

For updates and screenings go to: magpictures.com/myoldschool

MY OLD SCHOOL is opening in Los Angeles on Friday, July 29 theatrically.

“The most brilliant aspect of McLeod’s project: He’s built a virtual time machine of sorts, one that invites everybody to head back to their old school in their minds.” – Peter Debruge, Variety

“One of those unbelievable true stories so wild it must be true, Jono McLeod’s entertaining documentary “My Old School” is a must see.” – Nate Adams, The Only Critic

“This exceedingly creative and endlessly clever look back at a mysterious new student at a Scottish high school… works its true-crime storyline in a way that sticks with you as much as the more “serious” nonfiction entries.” – David Fear, Rolling Stone