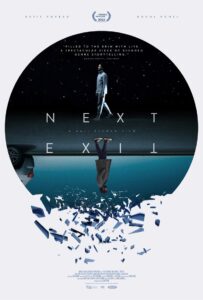 scientist (Karen Gillan) making national news “proving” that she can track people into the afterlife. Rose (Katie Parker) sees a way out and Teddy (Rahul Kohli) sees his chance to finally make it. These two strangers, both harboring dark secrets, race to join the doctor’s contentious study and leave this life behind. While Rose is haunted by a ghostly

presence that she can’t outrun, Teddy is forced to confront his past. As the two unlikely misfits humorously quarrel their way across the country, they meet people along the way who force them to reckon with what is really driving them. In addition to Katie Parker and Rahul Kohli NEXT EXIT also

features a sterling cast that includes Tongayi Chirisa, Tim Griffin, Diva Zappa, and Nico Evers-Swindell. Director / writer Mali Elfman joins us for a conversation on her inspiration for making the film, posing some of the most vexing questions about life and death, working with her brilliant lead actors and the challenges of making her first feature film a “road trip” endeavor.

For more go to: magnetreleasing.com/nextexit

To see in a theatre go to: magnetreleasing.com/nextexit/screenings

To watch at home go to: magnetreleasing.com/nextexit/watch-at-home

About the filmmaker –  Mali Elfman is a Writer, Director and BAFTA nominated Producer, who began her career with her micro-budget feature film DO NOT DISTURB. Since then she’s produced numerous films including Karen Gillan’s directorial debut THE PARTY’S JUST BEGINNING and Mike Flanagan’s BEFORE I WAKE, as well as numerous immersive experiences, including the award-winning ARCANA. She and filmmaker Laura Moss were selected as a team for the Tribeca and Chanel’s “Through Her Lens” Grant in 2019 and the Cannes Film Festival’s “Breaking Through the Lens” Program in 2020. Mali has written and directed many short horror films, the most recent of which, LOCKER ROOM Z, was distributed by Amazon Prime after playing in Alamo Drafthouse theaters. Her directorial debut feature film, NEXT EXIT, will premiere at Tribeca 2022.

“A great cast and fantastic story highlight this genre-bending road trip movie. One of the funniest and emotionally powerful movies of the year. A great debut from Mali Elfman.” – Nathaniel Muir, AIPT

“This is definitely a great opportunity to showcase Elfman‘s talent and further reason for us to look at Katie Parker and Rahul Kohli for the stars they are. With stunning performances, and intriguing concepts and characters, Next Exit is one not to miss.” – Kristy Strouse, Film Inquiry

“A must-see for those that enjoy listening to characters discuss lofty topics whilst forming connections. Think Linklater’s Before Sunrise viewed through a Black Mirror lens.” – Kat Hughes, THN

“Led by the exemplary Kohli and Parker, Next Exit represents the ascent of an exciting new voice in genre filmmaking, with a humane touch.” – Maria Lattila, whynow