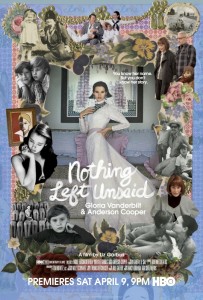 Gloria Vanderbilt and her youngest son, Anderson Cooper, come together with Academy Award nominated director Liz Garbus to reflect on their extraordinary personal history. Born under a name synonymous with wealth, fortune and New York royalty, Gloria Vanderbilt has lived in the public eye for over ninety years, unapologetically pursuing love, family, and career, and experiencing extreme tragedy and tremendous success side by side. Now, through Gloria’s charming and unique artwork, coupled with rare personal footage, and narrated by candid conversations between mother and son, we see her as never before. Gloria and Anderson tell the story of their pasts and presents, losses and loves, revealing how, in life, our family stories repeat themselves in the most unexpected ways. HBO will debut NOTHING LEFT UNSAID: GLORIA VANDERBILT & ANDERSON 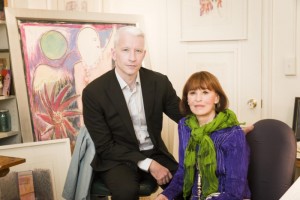 COOPER exclusively on Saturday, April 9. Academy Award® nominated director Liz Garbus is one of the most celebrated American documentary filmmakers working today; her films have been acclaimed worldwide, and have garnered multiple Academy Award® nominations and Emmy Award wins. Garbus’ most recent documentary, What Happened, Miss Simone? was the Opening Night film of the 2015 Sundance Film Festival and had its theatrical and worldwide release on Netflix in June. Garbus’ first documentary film, The Farm: Angola, USA, won the Grand Jury Prize at the Sundance Film Festival, was awarded ten other festival and critics’ awards, and was nominated for an Academy Award® in 1998. She stops by to talk about a remarkably accomplished woman who has spent her entire life in the withering glare of public and the press and the complex and loving relationship she has with her accomplished son, Anderson Cooper.