Winner of the Grand Prix at the 2019 Cannes Film Festival, ATLANTICS marks the 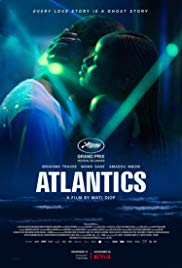 feature narrative debut of director Mati Diop. Along the Atlantic coast of Africa, a soon-to-be-inaugurated futuristic tower looms over a suburb of Dakar. Ada, 17, is in love with Souleimane, a young construction worker. But she has been promised to another man. One night, Souleimane and his co-workers disappear at sea. Soon after, they come back to haunt their old neighbourhood by taking possession of the girlfriends they left behind. Some of the workers have come claiming revenge and threaten to burn the tower down if the developer does not pay their wages. But Souleiman has come back for Ada, so they can be together one last time. Director and writer Mati Diop joins us for a conversation on her compelling new film, finding love, and the mythology of a ghost story.

About the filmmaker: Trained in Le Fresnoy (National Studio of Contemporary Arts – a leading and very selective French artistic institution), Mati Diop directed four shorts and a medium-length film which received the “Martin E. Segal – Emerging Artist Award” of the

For news, screenings and updates go to: mk2films.com/en/film/atlantics

“This shape-shifting Senegalese drama is pure cinematic poetry. Slipping in and out of modes with a magician’s confidence, Atlantics is mysterious and mythic, with a wizardly use of sound and some unforgettable images.” – ★★★★★ The Telegraph – Tim Robey

“Constantly intriguing, Atlantics is an intense romance notable for the craft of the filmmaking and Diop’s original approach to complex issues of love, loss and the forces for change that can rise from the ashes of tragedy.” – Screen International – Allan Hunter