Annabelle Attanasio makes her directorial debut with the critically-acclaimed feature MICKEY AND THE BEAR, starring Camila Morrone and James Badge Dale. Faced with the 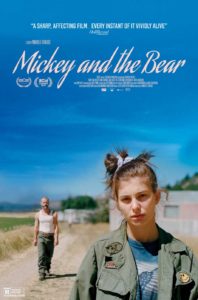 responsibility to take care of her opioid-addicted veteran father (Dale), headstrong teen Mickey Peck (Morrone) does what she can to keep her household afloat. When she receives the opportunity to leave her home for good, she must make the impossible decision between familial obligation and personal fulfillment. Mickey and the Bear is a heartbreaking, coming-of-age story that is anchored by remarkable performances from Morrone and Dale. It has a haunting ending that will stay with you long after the credits roll.  MICKEY AND THE BEAR, made its world premiere at SXSW this year, where it was nominated for the Grand Jury Award; the film was also selected for Cannes International Film Festival, Deauville Film Festival, the Montclair Film Festival, where

Attanasio was recognized with the Audible Storyteller Award; and the Nantucket Film Festival, where she was recognized with the Adrienne Shelly Foundation Excellence in Filmmaking Award. Director and screenwriter Attanasio was selected for this year’s Film Society of Lincoln Center’s prestigious Artist Academy program pegged to the 57th New York Film Festival, which has historically nurtured some of the most celebrated filmmakers of our time. Director Annabelle Attanasio joins us to talk about her thrilling debut feature film.

For news and updates go to: mickeyandthebear.com

Screening schedule for Mickey and the Bear

“Bolstered by a phenomenal cast and an ending that will leave the audience breathless, there is not a single misstep in the entire production.” – Bobby LePire, Film Threat

“Every shot in Mickey and the Bear is artfully composed… The performances are also quite strong. Morrone is especially affecting as the put-upon Mickey…. James Badge Dale is potent as Hank. – Gary M. Kramer, Film International

“Give Camila Morrone all of the roles. All of them. She deserves them all.” – Rendy Jones, Rendy Reviews