Syrian-born filmmaker Talal Derki (Return to Homs) travels to his homeland where he gains the trust of a radical Islamist family, sharing their daily life for over 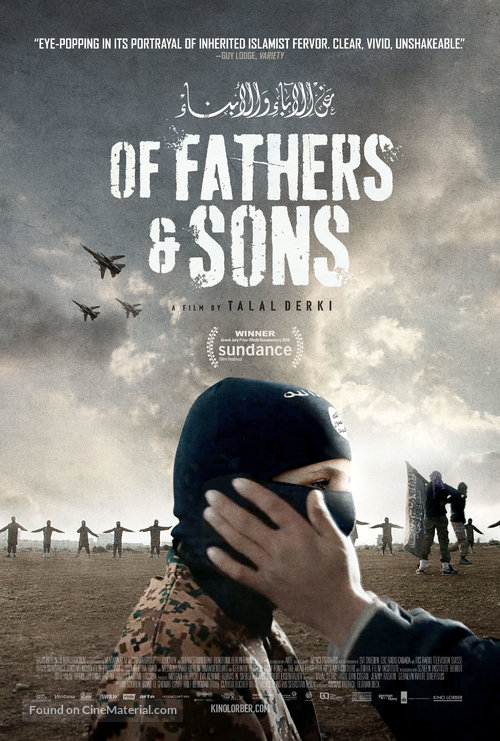 two years. His camera focuses primarily on the children, providing an extremely rare insight into what it means to grow up with a father whose only dream is to establish an Islamic caliphate. Osama (13) and his brother Ayman (12) both love and admire their father and obey his words, but while Osama seems content to follow the path of Jihad, Ayman wants to go back to school. Of Fathers and Sons was shot between Summer 2014 and September 2016. During that time, Talal Derki and Director of Photography, Kahtan Hasson, spent

about 300 days with Abu Osama’s family. Winner of the Grand Jury Prize for World Documentary at the Sundance Film Festival, Of Fathers and Sons is a work of unparalleled access that captures the chilling moment when childhood dies and jihadism is born. Director Talal Derki joins us to talk about his own personal journey through a devastated country and a troubled society, looking for answers to desperate questions about the future of his country and the future of his own family’s need to flee into exile.

For news and updates go to: offathersandsons.com

“A chilling look at extremism on its home front.” – The Film Stage

“Merely being present to bear witness to this side of the Syrian border would make “Of Fathers and Sons” well worth watching, but Derki is so scrupulous in what he reveals about how ingrained the beliefs of the Islamic jihadis are.” – Stephen Saito, Moveable Feast

“What makes the film all the more poignant is the fact that the children are, of course, despite all this, like kids anywhere else.” – Amber Wilkinson, Eye for Film

“An admirably audacious feat of documentarian access, Of Fathers and Sons is of obvious topical and anthropological interest as a glimpse into the gradual radicalization of young males and the deep community ties which underpin the process.” – Neil Young, Hollywood Reporter