On April 29, 1992, the streets and neighborhoods of Los Angeles, California started to burn just after the Rodney King verdict was announced where 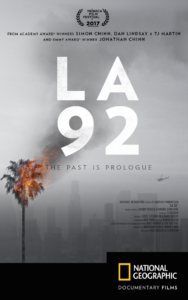 four white police officers caught on videotape brutally beating an unarmed black motorist (King) were acquitted of assault by a predominantly white Simi Valley jury. Violent protests, looting and arson lasted several days and left more than 50 people dead. Twenty-five years later, the acclaimed documentary LA 92  from Oscar® winning directors Daniel Lindsay and T.J. Martin (UNDEFEATED) explores the events leading to the violence, as well as the chaos and destruction that happened. LA 92  presents an incredibly immersive and affecting experience of a city in turmoil, without any talking heads or narration, which eerily resembles the same news stories we see on TV today in 2017. The filmmakers spent over a year searching and sifting through over 1700 hours of footage from news reports, journalists’ stories and news archives. Told entirely only through these stunning news reports and images and rarely seen archive footage, this gripping film captures the shock, disappointment and fury felt by many Angelenos, particularly those in the

African American community. In the case of the King beating, it was the first time the kind of abuse many had witnessed or experienced at the hands of LAPD officers was recorded and broadcast for the world to see, leaving some with the sense that if justice did not prevail despite such graphic evidence, it never would. Named by Variety as one of the best films of 2017, LA 92 is more than a moment in time, it’s an illuminating political, cultural and social experience that elevates our collective understanding of our history and ourselves. Co-directors T.J. Martin and Daniel Lindsay join us.

For news and updates go to: channel.nationalgeographic.com/la-92

“..not just a defining work on the riots and a wrenching visual essay on power, race, media, and mob violence in the modern era, but also one of the year’s best documentaries.” – Chris Barsanti, The Playlist

“The results are visceral, scary, and infuriating all over again, a true miscarriage of justice that turned into a civil uprising that asked more questions than it answered.” – Jason Bailey, Flavorwire

“An immersive, you-are-there experience that is as dramatic (or more so) as any Hollywood feature film.” – G. Allen Johnson, San Francisco Chronicle

“Gives a full sense of the anarchy and rage of the post-King verdict days, thrusting us fully and disturbingly into events in very much of a You Are There manner.” – Kenneth Turan, Los Angeles Times