In her latest documentary, TO KID OR NOT TO KID, filmmaker Maxine Trump turns 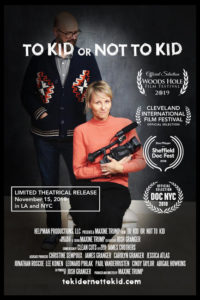 the camera on herself and her close circle of family and friends as she confronts the idea of not having kids. While exploring the cultural pressures and harsh criticism childfree women regularly experience, as well as the personal impact this decision may have on her own relationship, Maxine meets other women reckoning with their choice: Megan, who struggles to get medical permission to undergo elective sterilization, and Victoria, who lives with the backlash of publicly acknowledging that she made a mistake when she had a child. TO KID OR NOT TO KID bravely plunges into an aspect of reproductive choice often misunderstood, mischaracterized, or considered too taboo to discuss. With rising public awareness about climate change, resource scarcity and global population, this timely film asks the question “Why can’t we talk about not having children?” Director Maxine Trump joins us for a lively conversation on pros and cons of parenthood, how that decision has played itself out in her life and the lives of those around her.

About the filmmaker: Maxine Trump worked for the BBC in London for seven years as a development executive for scripted comedy before emigrating to the USA, working as a TV commercial director and producer for eight years. She won BDA awards for her work on

numerous commercial projects for Network TV and agency clients. She  went on to direct documentaries for Sundance, TNT, BBC, TLC, Discovery etc. Her previous feature film Musicwood was a New York Times Critics pick, festival award winner and played on TV and in theaters around the world. Maxine is the author of the book “The Documentary Filmmakers Roadmap” published by Routledge, she is a Sundance advisor and teaches documentary filmmaking at the New York Film Academy. She lives in Brooklyn, NY with her husband and inquisitive cat and is always seeking new stories to tell.

“Candid and empathetic, the movie’s segments can feel rushed and unfocused; yet they have a ragged intimacy that argues implicitly for an individual’s right to choose, without interference or condemnation.” – Jeannette Catsoulis, New York Times

“An engaging personal essay documentary about not having children, complete with interviews, arguments, hard data and sound reasoning coming from both sides of the debate” – Roger Moore, Movie Nation