In this biting domestic story, Jill, a lonely, unfulfilled housewife with four unruly children, paces on her dining room table with a belt 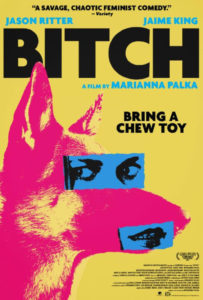 around her neck, contemplating a desperate end. Her husband, Bill, focused on his identity as breadwinner and an affair with a lusty co-worker, is as oblivious to Jill’s growing terror that she will do something destructive as he is to the panic at his unraveling company. Meanwhile, dogs bark and howl through the night, as one persistent mutt continually stalks the family’s yard. When Jill’s psyche finally breaks, she takes on a

vicious new canine persona. Marianna Palka writes, directs, and stars as Jill in this dark and provocative film, balancing a whip-smart, deeply unsettling take on the horrors of a crumbling nuclear family with a palpable sensitivity for her character’s plight and perfectly timed comedic flourishes. Jason Ritter delivers a beautifully tragicomic performance as Bill, who’s transformed by bizarre crisis from an indifferent hound of a man entirely untethered from his family to their unexpected emotional anchor. Director and lead actor Marianna Palka joins us in a conversation about her go-for-broke approach to the story and performance.

For news and updates go to: darkskyfilms.com/bitch

“A satirical scream of rage against patriarchal prerogatives, this feminist horror-comedy, written and directed by Ms. Palka, has a vicious edge… Palka carves a black and biting niche between a man and a woman, a space where chaos and psychological unease demand to be reckoned with.” – Jeannette Catsoulis, New York Times

“Marianna Palka is fearless. She wrote, directed and starred in a movie that has her acting like a rabid dog for most of its duration. It’s a bold move, and one that pays off in a big way.” – Meredith Borders, Birth Movies Death