A documentary as dramatic, ambiguous, and multilayered as any fiction film, A RIVER BELOW examines the efforts of two conservationists in the Amazon to 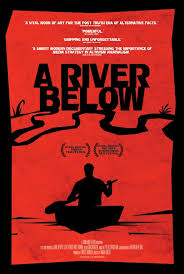 bring about change by using the national media, only to discover the consequences of their actions come with a high price. A RIVER BELOW provides an eye-opening look at what happens when passion and opinion trump reason and morality. The crux of the story questions the truth in images, its manipulation to get the public’s attention and, ultimately, who pays the price for someone else’s passion for radical change.

Director Statement – “A RIVER BELOW explores these ideas and moral questions, but ultimately it is the story about the massacre of this incredible dolphin, the people out there trying to save them, and the ethical dilemmas we face with what must be done to achieve sudden change. There is no doubt that we are living in an extinction crisis and there is very little time left to save certain species – that is the view of the river from above. My hope is that this film will take audiences on the plunge to ask, “Who do we want out there saving in our name and at what long-term cost?” It is a mirror held up to the documentary and a journey into ourselves as we attempt to better this messy world.” – Mark Grieco

“The truth turns into a tangled mess in “A River Below,” a bold and urgent documentary whose seemingly straightforward story quickly runs awry.” – Ken Jaworowski

“Díaz’s sublime cinematography and the way Grieco teases out the knotty narrative make for a haunting exploration of an ethical morass, where vilification is easy, but deconstructing power much more difficult.” – Daphne Howland, Village Voice

“[It] is pure investigative journalism. It trusts no one and questions every side of the story — even the possible coercion of illegal activities by one of its stars while those he coerced have threatened to shoot him in the head if he ever turns up again” – Jacob Oller, Paste Magazine