Jennifer Brea is a Harvard PhD student soon to be engaged to the love of her life when she’s struck down by a mysterious fever that leaves her bedridden. She 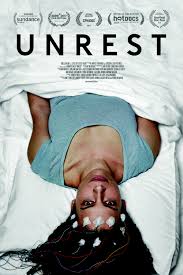 becomes progressively more ill, eventually losing the ability even to sit in a wheelchair, but doctors tell her it’s “all in her head.” Unable to convey the seriousness and depth of her symptoms to her doctor, Jennifer begins a video diary on her iPhone that eventually becomes the feature documentary film Unrest.  Once Jennifer is diagnosed with myalgic encephalomyelitis (ME), commonly called chronic fatigue syndrome, she and her new husband, Omar, are left to grapple with how to live in the face of a lifelong illness. Refusing to accept the limitations of bedbound life, Jennifer goes on an inspiring virtual voyage around the world where she finds a hidden community of millions confined to their homes and bedrooms by ME. These patients use the internet, Skype and Facebook to connect to

each other — and to offer support and understanding. Many ME patients have experienced uncertainty, confusion and even disbelief from the medical community and society as a whole. After all, it’s easy to ignore a disease when patients are too sick to leave their homes. In Unrest, Jennifer shares her pain and the most intimate moments of her life in order to offer hope and visibility to those who suffer alone in dark, silent rooms. Though Jennifer and Omar may have to accept that they will never live the life they originally dreamed about, together they find resilience, strength, and meaning in their community and each other. Director, subject and activist Jennifer Brea joins us to talk about her journey, illness and her determination to make things better for people living with ME.

For news and updates go to: unrest.film

“The movie delivers a striking degree of emotional authenticity with its home footage, allowing it to become more about its central couple’s resilience than the hardships that tests their bond.” – Eric Kohn, IndieWire

“It powerfully insists on giving a voice to victims whose greatest challenge, apart from their symptoms, is surmounting a world of indifference.” – Daniel M. Gold, New York Times

“Brea shot much of the film on her iPhone, which often gives it the tone of a found-footage horror film. Making it all the more horrifying is the fact that not only is it real, but it’s while Brea is unable to stand up or often even move beyond crawling.” – SF Weekly