In Brampton’s Own Dustin Kimmel has decided to call it a career and return to his small hometown where he was once a celebrated athlete. After 12 years of 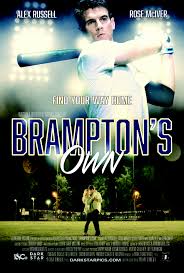 withstanding the rigors of minor league baseball in hopes of making it to the big leagues, Dustin discovers much has changed since he’s last been back as he struggles to fit in. His old friends have started families, his ex-girlfriend is now engaged, his mom is selling his childhood home and moving in with her new boyfriend, and the only person who wants to hang out with Dustin is Gavin, a 40-year-old Brampton lifer who still wears his varsity football letterman jacket around town. Having neglected to prepare for life

after baseball, Dustin’s trip home forces him to confront the very decisions that led to his current purposeless state. BRAMPTON’S OWN stars Alex Russell (Chronicle, Only The Brave) who plays Jim Street on CBS’ SWAT and Rose Mclver (CW’s iZombie), and in supporting roles; Spencer Grammer (Rick and Morty), Scott Porter (Dear John), with John Getz (The Social Network), and Jean Smart (FX’s Legion). Director and writer Michael Doneger (The Escort, This Thing With Sarah) talks about working with young and talented actors, intimacy, following your dreams and knowing when its time to move forward.

BRAMPTON’S OWN Q&A with filmmaker Michael Doneger and actors Alex Russell, Scott Porter and Kevin Linehan following the 5:20 PM show on Saturday, 10/20 at the Playhouse.