In their new documentary ONE OF US, acclaimed observational filmmakers Heidi Ewing and Rachel Grady (JESUS CAMP, DETROPIA) take a deep and moving look at the 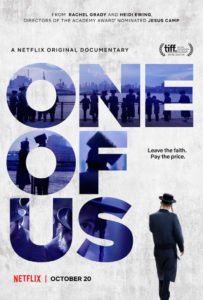 lives of three individuals who have chosen to leave the hugely insular world of Hasidic Judaism. The film follows Etty, a mother of seven, as she decides to leave a violent marriage and divorce her husband; Ari, a teenager on the verge of manhood who is struggling with addiction and the effects of childhood abuse; and Luzer, an actor who, despite having found success in the secular world, still wrestles with his decision eight years earlier to leave the Hasidic community. Produced over three years, ONE OF US offers unique and intimate access to the lives of all three as they deal not only with questions of their beliefs but also with the consequences of leaving the only community they have ever known. With their trademark sensitivity and keen interest in the nature of faith, Ewing and Grady chronicle these journeys towards personal freedom that comes at a very high cost. Co-directors Heidi Ewing and Rachel Grady join us for a conversation on their emotionally wrenching look into a world of dogmatism, ostracism and community.

Directors’ Statement – We have always been drawn to stories that put the nature/nurture debate into stark relief. Are some of us just born with an unshakable need to question the

status quo, despite the consequences? The three main subjects of One of Us are jumping head first into the unknown.  Their rocky journey from insular Hasidic Brooklyn out into the secular world – with its emphasis on radical individualism – is fraught with both doubt and exhilaration. These three brave people are bucking the exacting rules of their ultra-orthodox community to experience the world for the first time as true individuals. Their journey is a profoundly human one that took us by surprise. One of Us is the most thought-provoking film we’ve ever made. We are excited to hear audiences weigh in on the vexing question of what price we’re all willing to pay to forge our own identity.

One of Us is available on Netflix

To find out more about the films of Rachel Grady and Heidi Ewing go to: lokifilms.com

“It’s incisive in its condemnation of the oppression innate in the social structure of Brooklyn’s Hasidic communities.” – Christopher Gray, Slant Magazine

“Heidi Ewing and Rachel Grady have made their most powerful and complex film.” – Sheri Linden, The Hollywood Reporter