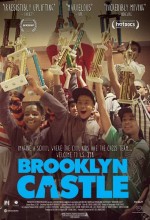 BROOKLYN CASTLE tells the stories of five members of the chess team at a below-the-poverty-line inner city junior high school that has won more national championships than any other in the country.  The film follows the challenges these kids face in their personal lives as well as on the chessboard, and is as much about the sting of their losses as it is about the anticipation of their victories. Ironically, the biggest obstacle thrust upon them arises not from other competitors but from recessionary budget cuts to all the extracurricular activities at their school.  BROOKLYN CASTLE shows how these kids’ dedication to chess magnifies their belief in what is possible for their lives.  After all, if they can master the world’s most difficult game, what can’t they do?  Director Katie Dellamaggiore stops by to talk about this captivating documentary and the insight she gained working with a smart and dedicated group of middle school students.

“If you want to see what may well be the most optimistic, inspiring and downright thrilling movie released all year – then absolutely do not miss Katie Dellamaggiore’s documentary Brooklyn Castle” – Andrew O’Hehir, Salon

“A wonderful doc. If I could pick only one film from the South By Southwest film festival and bodily force everyone I know to see it, it would be Brooklyn Castle.” – Linda Holmes, NPR