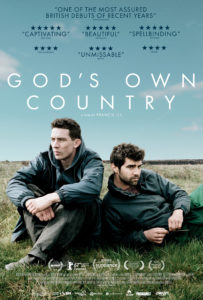 England. He numbs the daily frustration of his lonely existence with nightly binge-drinking at the local pub and casual sex. When a handsome Romanian migrant worker arrives to take up temporary work on the family farm, Johnny suddenly finds himself having to deal with emotions he has never felt before. An intense relationship forms between the two which could change Johnny’s life forever. This growing chemistry between them results in an intense, instinctive sexual encounter. With both lads struggling to come to terms with what their time on the moor really meant and what they want from each other. With the future of the farm, his father’s life and his fledgling first relationship all hanging in the balance, Johnny feels more isolated and powerless than ever. Sent back to the farm on their own by Deirdre to tend to the animals, Johnny and Gheorghe slip into an unspoken domestic life. But soon Gheorghe’s contract will come to an end… Director Francis Lee joins us to talk about this simple story of struggling people living on the edge drawn into an emotionally complex tale.

For news and updates go to: samuelgoldwynfilms-Gods Own Country

“There will be many people who see themselves in the furtive glances and mud-covered kisses from which “God’s Own Country” weaves its harsh but hopeful narrative, and they will do so while witnessing a finely crafted piece of cinema.” – Jude Dry, IndieWire

“Skipping some of the more predictable narrative obstacles we’ve come to expect from the coming-out drama, this sexy, thoughtful, hopeful film instead advances a pro-immigration subtext that couldn’t be more timely …” – Guy Lodge, Variety

“This is one of the most assured, fully-formed British debuts of recent years.” – Paul O’Callaghan, Sight and Sound