The riveting documentary THE WORK, set inside a single room in Folsom Prison, follows three men from outside as they participate in a four- 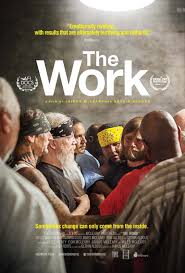 day group therapy retreat with level-four convicts. Over the four days, each man in the room takes his turn at delving deep into his past. The raw and revealing process that the incarcerated men undertake exceeds the expectations of the free men, ripping them out of their comfort zones and forcing them to see themselves and the prisoners in unexpected ways. THE WORK offers a powerful

and rare look past the cinder block walls, steel doors and the dehumanizing tropes in our culture to reveal a movement of change and redemption that transcends what we think of as rehabilitation. Director Jairus McLeary joins us to talk about the men, inmates and outsiders, the program and the challenges of making a film about men seeking to reclaim their lives.

For news and updates go to: theworkmovie.com

For news and doing your part to continue The Work go to: insidecircle.org

“A simple, tense, gritty auditing of a collective unburdening that obviously brings some needed clarity, and the promise of rehabilitation, to some hurt, searching souls.” – Robert Abele, TheWrap

In its visceral purity, the film drags male toxicity up into the light, offering it as a cure for itself. – Chuck Bowen, Slant Magazine

The Work makes gruelling viewing at times – it’s more like psychotherapy than entertainment – but, by the end, viewers will feel as if they’ve been on the same rewarding journey as the subjects. – Geoffrey McNab, Independent (UK)

“The Work chronicles a kind of breakneck psychoanalysis in which the origins of problematic behavior are dramatically expunged in public.” – Eric Kohn, IndieWire

“No filmmaker could have written a richer set of masculine archetypes as these real individuals represent, each equally totemic in his defining idiosyncrasies and in his historically male characteristics.” – Sean L. Malin, Austin Chronicle